I met my brother and showed my game to him. He asked "so, what is this game about?". I went totally silent for a minute, the I said "Umm... the game is about.. damn.. this game is too complex!". I had been developing the game for a long time alone, without showing or explaining the game to anyone. In that time I had lost the main goal of the game and just added new features and graphics.
I knew then, I needed to change the game radically.

For my brother I finally explained how the game was about collecting tokens, and catching monsters. All this was needed to be done while moving towards left side of the screen, and whatever player did, the ship still sank. People who tested it asked me "why did I fail", and I answered "Oh! you didn't fail, it will always sunk at the end". This raised an alarm in my head "I have done something wrong, and it needs to be changed." 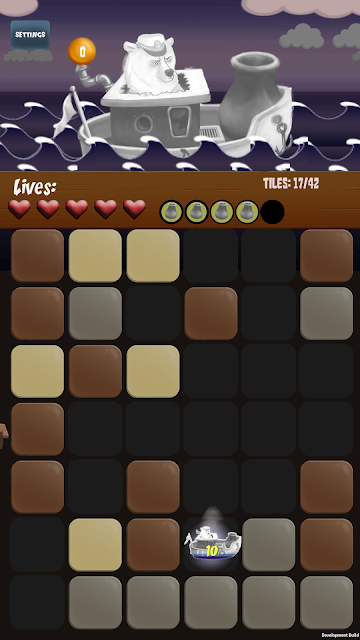 But after this 'Horrible Elevator Pitch', I trashed half of the features and changed the main goal of the game.
After the change, player's main goal was to clear the screen from tiles by using the avatar. The goal was simple and easy to explain:

"Clear the game board from all the tiles by matching the same colored tiles together".

Player could combine so many same colored tiles he could. If he combined more than 3 tiles, he gained a bomb. With the bomb player could clear up a tile, which he couldn't reach anymore. Lives, shown as hearts, were used at the end of the level, if player had left some tiles on the board. The game ended if player got 'stranded away', meaning that player was surrounded by the black tiles.
In this prototype the main goal was to get through so many the levels than possible.
When one level was cleared player continued to the next one. If player died, he started from the beginning.
- Simple goal, but challenging to master.