Part 2: The Dead End and The New Beginning

In my previous prototype, the player just connected the same colored tiles together. I started to think about having a avatar in the game field. Then I would distinguish my game from the other match 3 games out there, because I had not seen that kind of match 3 game before.

So, I added a ship. The reason for, why it was a ship and nothing else is simple, was because I played Port Royal 3 at the moment. There the player is sailing at the Caribbean and taking resources from one city to another and making a trade. I liked the idea, and I though "I could make it simpler and put it to my game". So, I added a ship and two docks.
Now player needed to collect the tiles of certain color, which is indicated at the top of the dock, and bring them to the dock. Then player would get points from it. 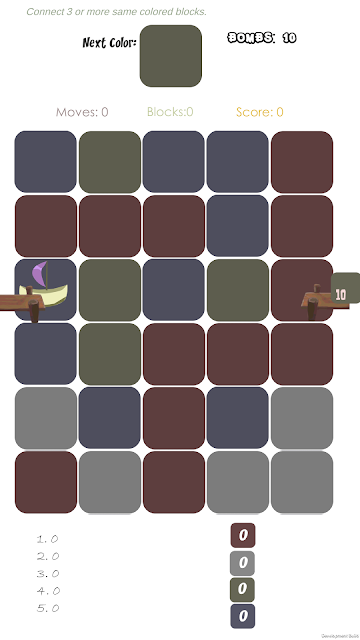 When I played it, I was confused. - Can you imagine it? The game designer is confused what to do in his own game.
The game was just too complex. Now when I'm thinking of why, I notice that I should have done something with the moving the player. In this version, the tile underneath the player needed to be same color than the next 3 tiles adjacent to it. That made the game too complex, even if I had 'BOMBS', which could be used to change the tile underneath.
Later on I changed it so, that the player could also move one tile at the time. But when making this version of the game, I didn't come up with that solution.

I ended up in situation, where the prototype was a bust. But I found one thing from it, which made me curious. I liked to have the the avatar on the board. It made the puzzle unique and interesting mechanic, so I kept that and ditched the docks.