After ditching the previous prototype version, I started to think about the theme and the main goal. I came up with an idea of a chicken, who wanted to run away, and I called it "The Chickening".

Now the red line would indicate the doom that player was running away from. The red line moved slowly forward, and player needed to avoid it. Player still had limited amount of moves, but he could get more moves by managing to reach the checkpoint. 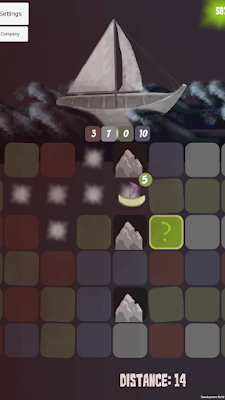 In the picture, the 'Question Mark' tile is indicating the Checkpoint. In the checkpoint tile player could change the collected tiles into extra turns. It would require one tile of each color. 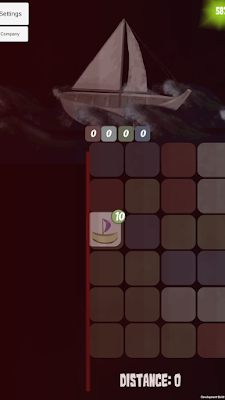 The top screen was for visual reasons. I wanted to add something visually interesting on the screen, because the ship was so small and tiles weren't that interesting to watch. So, I made ship that was animated to rotate by the waves, and the waves were moving from right to left.

The screen is dim, because I wanted to add feeling of progress by making the screen go lighter when player advanced to the right. 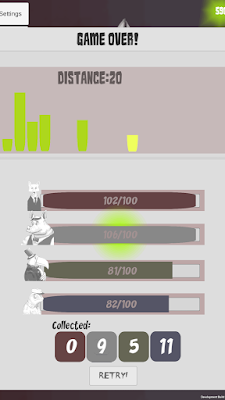 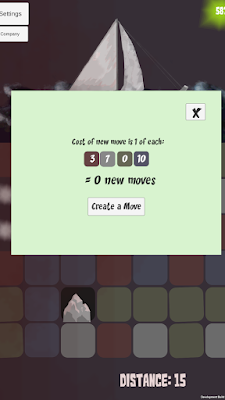 <  Here player could trade the tiles he gained from his moves, and make extra moves out of them.

>  At the end player could see how many tiles he collected.
If he could get the fill bar full, the animal companion, would join him.


Animal companion was like an power up, by giving some ability to player to use or otherwise to help the player. For example: Fox The Lawyer  would give player one extra change to continue, if he would get touched with the red line of the doom. But that would work only once per round.

I liked this game a lot! It felt solid. The basic mechanic of collecting tiles and changing them into turns worked very well. More you collected different colors, further you advanced. It was simple and challenging.

But somehow it felt too 'static', there wasn't much of action happening and nothing special to be expected. So, that started to bother me. It was good, but was it good enough!?

Now, when I'm thinking about it, it pops out the question of very essence of game development "what is good enough?". What is the point that you can say "yes, it is perfect"? Well, what I have heard from other developers, even  from people who make triple-A games, there isn't a moment that you are satisfied enough on your own game. Your own game is never "good enough", there is always something to polish or make it better.
The game developers need others to say when it is done. It can be publisher, CEO or even your close friend. Otherwise you end up in vicious circle of changing things endlessly. I think that was exactly what happened to me. With this prototype, I should have had someone saying to me "It's good game mechanic, now make it to the store! You have one month for it, otherwise I'll beat the hell out of you!"