I started to think about how to use 'the avatar on board' game mechanic. I came up with an idea of the game board continuing to the right and player trying to get as far as he could by matching the same colored tiles. Player would have 5 moves, and the 'bombs' would change the tile underneath the ship.

The distance would be his score. 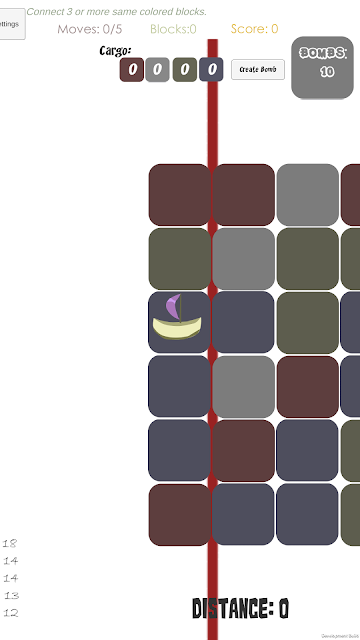 In the picture above, the red line shows what is the longest point the player has reached.
I added an extra feature in the game, it was called 'Cargo'. When player had 1 tile of each color, he could create a bomb. In this way I wanted to encourage the player try to use different colors for making the path.

I don't recall, why I actually didn't stick with this game idea, but moved on to a new one.
It had a simple goal and it was an 'endless runner', which is a good thing, if you think about making a game in short schedule.
I guess the one reason was that I hadn't come up with the idea that the tile underneath the player could be a 'joker', a tile that could be connected to all the colors. In that way player could move more freely, and not to worry about the bombs and the color of the bomb, that made the game hard and slow paced.

When ending up in "this is not fun enough" or "there is something not right" moment, it can be hard to pinpoint the exact reason. With this prototype, I was in that situation: something needed to be changed, but what!?