Because I had tiles of different colors, I wanted to use that too, in some way. So, I came up with an idea that different kind of tiles would give different kind of ammo. Eventually I designed the tiles with icons and drew different looking fish to indicate what the ammo would do. 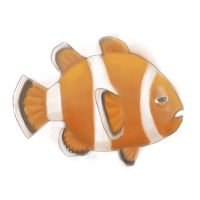 Clown fish: Gave ability to shoot two targets at once. 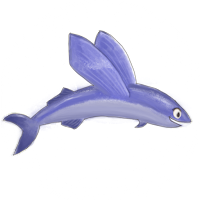 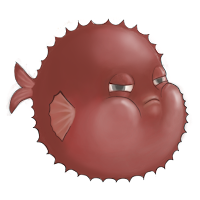 Blowfish: Was triple amount of damage.

I started to think, the automatic shooting made player distant from the shooting and gave him less control. The movement was controlled by the certain amount of turns. So, I wanted to make the turns also control the amount of the bullets. So I changed the mechanic in a way that the amount of tiles player would collect in one turn, was equal of how many bullets were going to fly. If the player could connect five tiles in one turn, there would be five bullets shot. 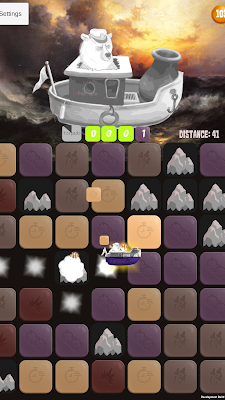 I wanted also to show to player where the automatic targeting would hit, so I made crosshair. 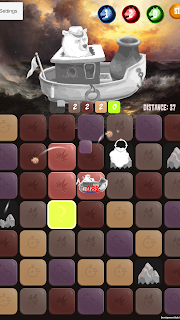 The crosshair did pop out a question "could the player choose where to shoot at". I gave it a thought, but I found it would give the player too much things to do at the same time and confuse the player. So, I left it out.

In the end. I left the whole shooting out of the game. I had worked with it about a month: made different ammo, different graphics and tuned  how the shooting worked. Everything was set for the shooting to work perfectly. I had worked the shooting a long time, without never thinking where I was getting with it.
But in the end I found out, the shooting same time as moving confused player. Player didn't know what was the more important: shooting the enemies or get further as possible, which was my initial goal of the game. The game now had two different goals fighting for player's attention.
So I need to make the rough call and take the shooting away. If I would have kept the shooting, I would had to do something with the match 3, at least that was the conclusion I made at that time.
By keeping my head by wanting to make the game a simpler, I removed the shooting - even if I personally loved that feature.