Like most of the people who are into games, I also have lots of 'cool ideas' for a games. But usually it ends with you saying to yourself, "If I just could have the time for it".
I finally had that situation in my life where I could start making my own game. I had the time and the budget for it. But suddenly, I didn't have any "awesome" or "magnificent" idea in my head. I just wondered by myself "what should I do!?". I had tons of old ideas, but they weren't interesting anymore. "How could this happen to me!? I have always had the best ideas ever!", I thought to myself in very egoistic way.

I came up with a plan. I would use 3 months to make my own game and publish it in the mobile marketplace. The game should be simple, so I could make it in short time. After that I could use the same mechanics, and make another version of it or develop the first version further. But main goal was to get something into the store, and fast.


First idea I had: Was to make a game using the same base game mechanic as Best Fiends and Dungeon Raid, where you need to draw a line to match the similar objects. 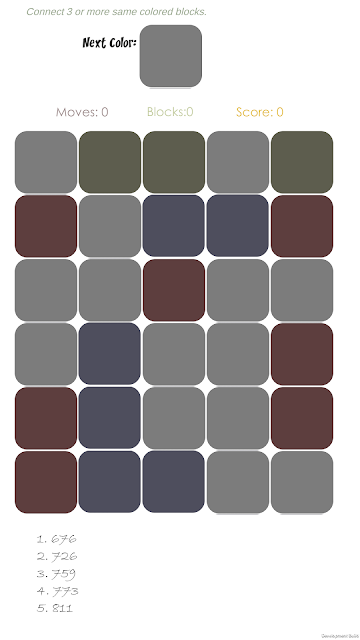 In this version player needs to connect 3 of the same color to change them into a designated color at the top. The goal is to get the whole screen to change into the same color. It didn't matter in which color.

I made the game in 4-6 days. I played it myself, and showed it to my friends. I liked it and my friends were also interested in it. But it had one flaw, the end of the game was repetitive: when player had almost all the colors but not the few last ones, player needed to wait until the randomized next color would change into the right color. It kind of killed the mood. I tried to figure out a simple way to correct that, but in that time, I didn't come up with any simple solution. So, I saved this prototype for the moment, when I would get the good solution for the problem, without making the game too complex.