Instead of settling with what I had, I turned the next gear on, and added a lot of new stuff!

I was trying to think about how to make it more "alive", because it felt too static. I had some 'moving mountains' in the game, that were indicated as enemies. So, I got an idea "what if the enemies could be shot at".
I went back to design phase, and started to change the idea about "who is doing what". Previously I had an idea of Chicken, who is running away, and collecting some friends with him, while trying to avoid doom. Now I had a big bear on a boat! The bear is sailing with a big cannon on it, destroying everything in its way. 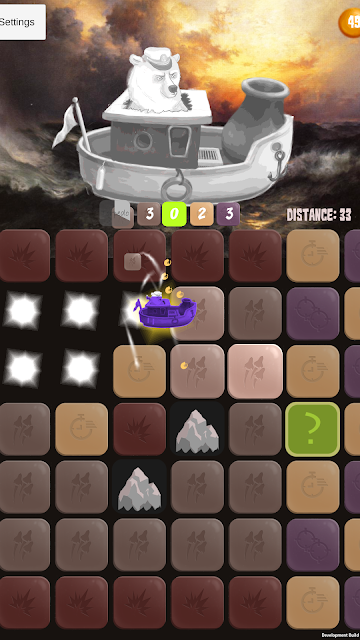 First the cannon shot automatically, and there wasn't any difference in the bullets. Then I wanted the differently colored tiles to somehow have an effect on the shooting. So, I made the tiles to decide, what kind of bullet it would be.
There were 4 different tiles: one made the cannon shoot faster, one did triple damage, one shot at two targets at the same time and the final one didn't shoot at all, it made the ship go faster.
The ship was also sinking, so I made indication to the player's avatar that it is being filled with water. The ship was being filled according to the turns player made. 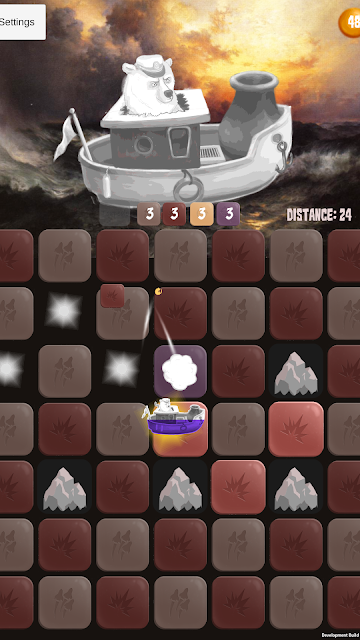 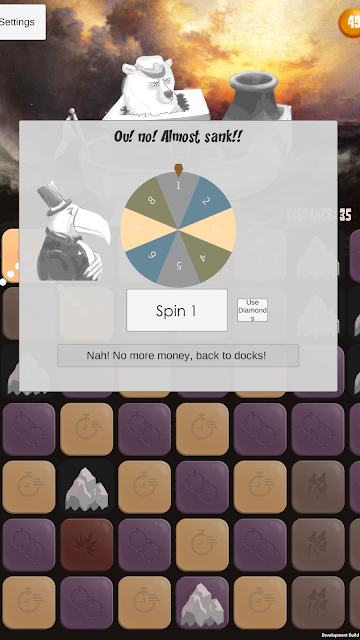 I also added a 'Wheel of Fortune' for the situation, when the ship was filled with the water. In this situation, ship could be emptied from the water, wheel re-spin or player gets some extra gold.

The game board wasn't anymore randomized like it was before. Now I could design levels, if I wanted so. The main goal for the player was to get to the end of the level. If ship sank, the player would need to start from beginning.
At the checkpoints player had an option to use 'gems' (bought with real currency), to activate the checkpoint as 'save point', where he could restart the game next time.

To this prototype I had everything planned out: monetizing, change of luck, re-play value. Only thing was, just to make them work in the game.